It takes commitment to visit Pemuteran, a fishing village on Bali’s northwest coast

The four-hour drive from South Bali is a grueling one, through windy, mountainous tracks barely wide enough for an old Mini Cooper, let alone the huge trucks that career wildly around every second corner. And if you have kids with you, they’ll get car sick. We know from experience.

But if days lazing around on (mostly) empty beaches, seeing stress-melting views, and getting in hours of quality snorkeling are your thing, then it’s definitely worth the journey.

Here’s a rundown of what sparks serious joy for us during long weekend trips to Pemuteran.

Life in Pemuteran is played out on the beach, a curved bay of volcanic sand backed by pretty, purple-hued mountains. The shore is studded with rainbow-colored jukung (traditional fishing boats), and local kids come out to splash in the shallows come sunset. It’s a world away from South Bali.

The tourists are relatively few, and most opt for the laidback bungalow-style resorts that spill out onto the sand. Taman Sari is the most popular option with its gorgeous tropical gardens and shady expanse of beach. 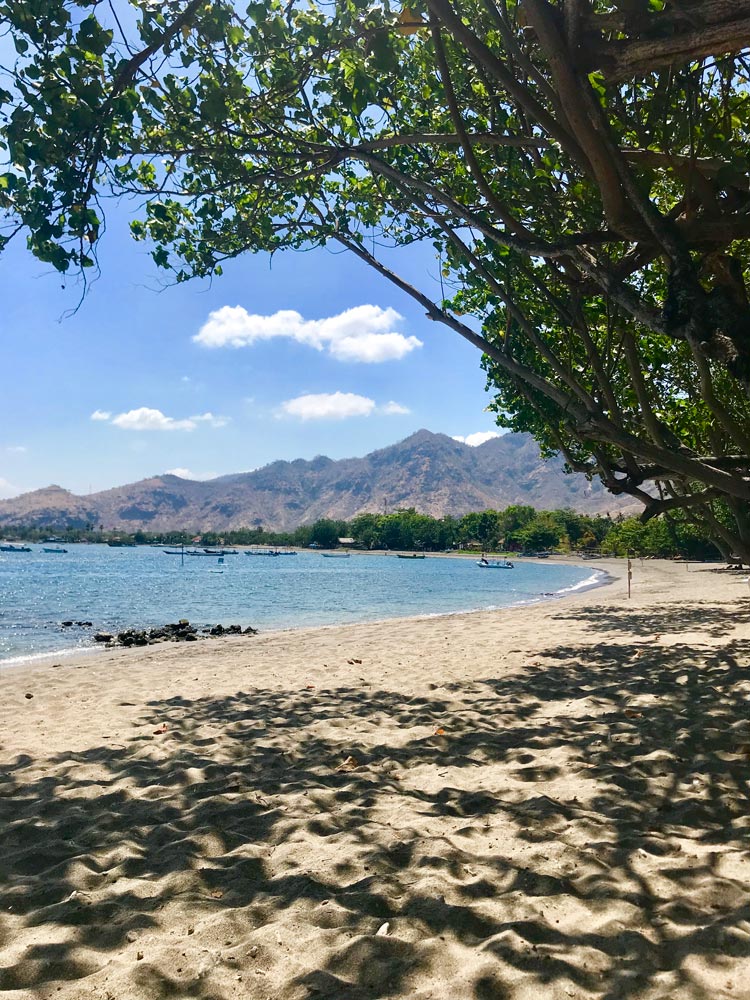 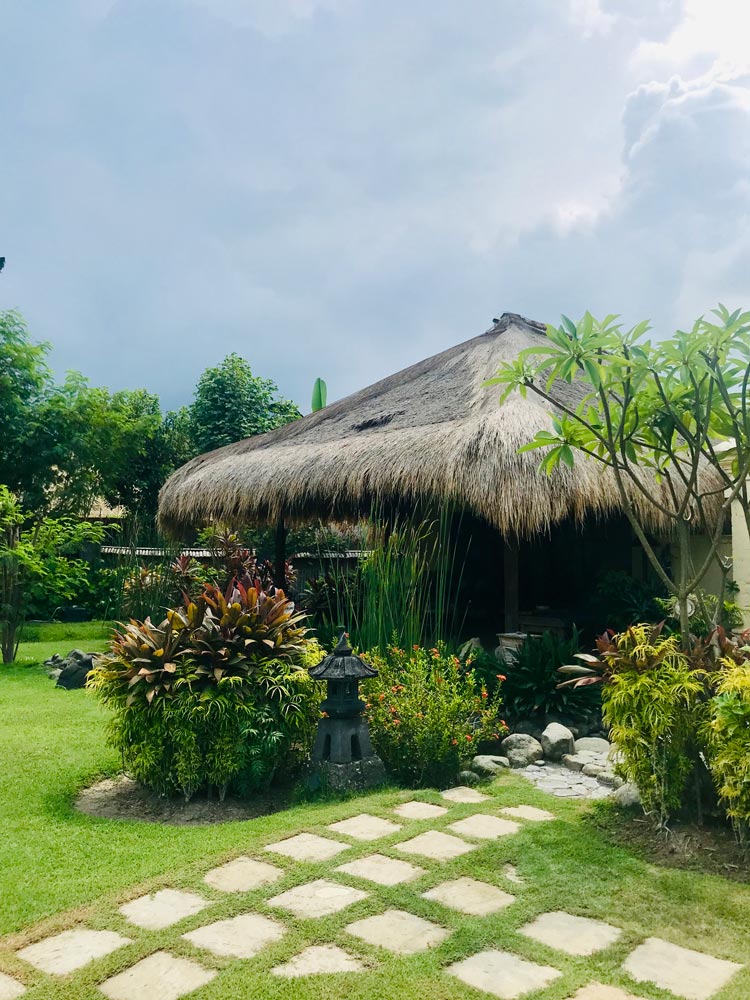 And, trust us, you’ll be thankful for that tree cover come lunchtime — the sun’s rays can be hot enough to give you head spins at this time of year. A cooling paddle in the (mostly) glass-pane-clear water is the best way to simmer down. Or, you can hire a snorkel from one of the beach shacks and check out the biorock project, which is apparently the largest community driven reef restoration initiative in the world.

Actually, once you pause and look around, you’ll probably notice that Pemuteran is home to some pretty eco-minded residents. It’s refreshing to see, really.

Remember how we said that the water is “mostly” clear? Well, it would be truly clear if it weren’t for the dreaded plastic pollution — if you live elsewhere on the island, you know the sight. It gets especially problematic during the turn of rainy season. Keeping it under control is a daily challenge for the locals living here, and we even came across one clean-up operation going as far as to snorkel for trash. 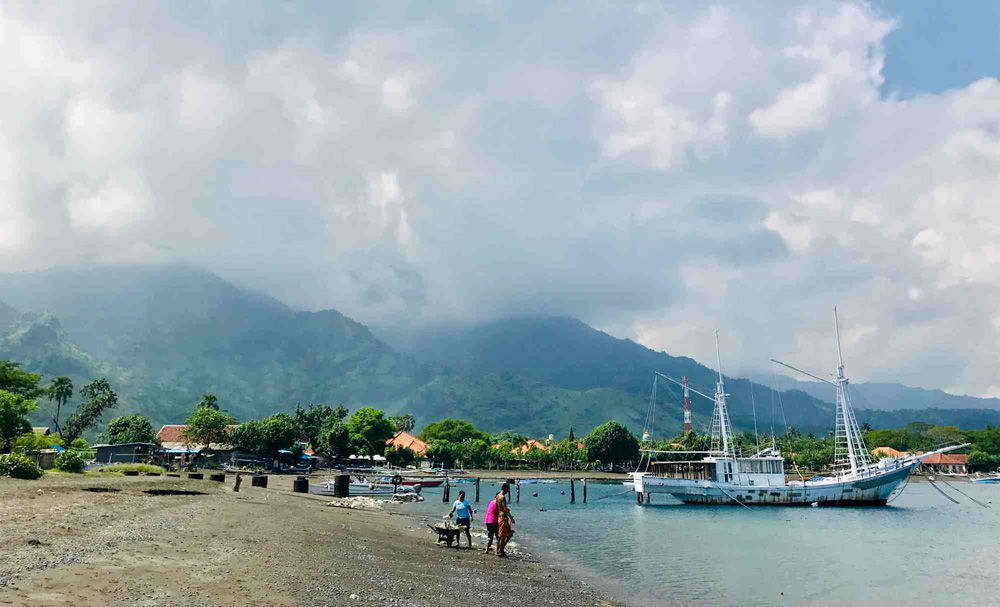 Just opposite the ritzy Matahari Resort & Spa, you’ll find the dirt track that leads towards Batu Kursi temple. There’s a distinctly unofficial looking ticket office at the start point, and you’ll need to pay a small donation of IDR20,000 (US$1.40) before you begin the ascent up to the temple (about 20 minutes).

Get ready to pant! Heavily.

The views are stupendous. Rolling hills, dressed in bright, wet-season greenery, stretch endlessly in every direction. Craggy peaks along the way make for tempting selfie spots, and someone’s even put up one of those homemade bamboo swings (with obligatory death-defying location atop a cliff).

As is so often the case, the temple itself is pretty underwhelming. We didn’t even go inside. But hey, maybe you’ll want to do this one for the wraparound mountain views and feel-good fix.

Hours of snorkeling at Menjangan Island

Part of the West Bali National Park, Menjangan Island is a beautiful patch of unspoiled wilderness on the northwestern tip of Bali. “Menjangan” means “deer,” and that’s exactly what you’ll find on the island, along with snakes and plenty of bird species.

Warning: It’s also possibly the hottest, most arid spot in all of Bali.

Stick with the snorkel boat.

La Bella Dive, on the main road of Pemuteran, offers guided half-day snorkel trips for IDR500,000 (about US$35). If you’re lucky, you’ll get to spend the day with a smiley Balinese snorkel guide named Nengah. He’s also a qualified dive instructor, so he’s a hot shot with the local marine and coral species, and can tell you how to avoid being stung, bitten, or pursued by an angry tiger fish.

Menjangan is known for its wall diving, though even as a snorkeler, you can glide around the edge of walls and see schools of tiny reef fish, darting around in formation. Trumpet fish, clownfish (now more popularly known as “Nemo”), eels, and electric blue tangs are among the most common sightings. Thankfully, it’s too warm for really big fish, though Nengah says he’s seen whale sharks on occasion.

*A half day dive package, including a dive guide, boat, lunch, mineral water and all equipment, is available at La Bella Dive for IDR950.000 (about US$67) per person.

The Gebug Ende tradition is carried out to summon the rainy season — or so we were told when we stumbled upon it in a clearing at the foot of the Batu Kursi Temple track.

Essentially, bare-chested men get tipsy on tuak (palm liquor) and challenge each other to bamboo stick duels while spectators roar with laughter. Children as young as eight and men as old as 80 step up to dance, with each bout seeming to last only seconds before volunteer referees stop the action. Friends drag neighbors up to the ring, chortling away like children, and plastic gallon jugs of tuak keep the whole crowd merry.

All is soundtracked by the metallic crescendo of gamelan (Balinese percussion) and done with a great spirit of camaraderie. We were two of only four foreigners in the crowd of 50, and were welcomed (and even asked to take part in the fighting), in true Balinese style.

Your chances of catching a Gebug Ende are pretty slim, since we also learned that it only occurs once a year — but, if you’re visiting at the start of rainy season, try asking your hotel or villa staff to find out the schedule for you.

Eating, drinking, and views on views

Michelin-standard restaurants you won’t find, but if you’re into rustic charm, uninterrupted ocean views, and frosty Bintangs, then Pemuteran’s your place. Strolling down to the beach for a bite is just fine most evenings — Taman Selini’s Greek cafe serves up good spanakopita, dips and salads, and Taman Sari’s kitchen puts out reliably good Indonesian and European dishes.

But if you’re after something a bit more novel, make for The Menjangan, a five-star resort set within the West Bali National Park. First up, their Bali Tower Bistro. With five open-air floors, it soars above the forest canopy, and offers more of those amazing North Bali views (though we have to admit, we’ve never actually seen anybody dining there).

We always plump for their Pantai (beach) restaurant, partly because you have to ride safari-style through the forest to get there. It’s a bumpy, branch-dodging kind of ride, but you’ll likely be rewarded with monkey and deer sightings along the way.

Pantai restaurant is set on overwater wooden decking with views of the mangroves, shore and woods. It’s a tranquil sunset spot to share one of their mezze or charcuterie platters over a glass of vino.

Speaking of vino, you might be surprised to hear that North Bali is home to 400 hectares of tropical vineyards, where the island’s two main producers, Hatten and Sababay, grow their grapes. Hatten has a small visitor center in their Sanggalangit vineyard where you can try a drop and check out their vines, too.

There you have it, readers. Hope this one comes in handy next time you’re feeling a bit claustrophobic in South Bali and would like a change in scenery.

Strike a Pose: Where to Buy Beautiful Yoga Wear in Bali